BOOK NOW
Image may be subject to copyright

About Our Historic Inn in Galena, Illinois

We are very honored and humbled to be the proprietors of Lamberson Guest House. This beautiful home has a story to share and we vow to continue its legacy. Our love is hosting family and friends, historical homes and the art of sharing gourmet food. As we are energized by people, we too would like guests to become energized through relaxation and enjoyment of this amazing destination. In the summer of 2020 we were guests sitting in the serene courtyard and gardens at Lamberson Guest House surrounded by a community that time forgot. Now we are privileged to be the 10th owners of this 150 year old legacy.

We continue to strive to ensure that you experience the most comfortable, pleasurable visit possible at this treasure overlooking Galena. Looking forward to meeting you in person!


Chris & Resa Larson,   Proprietors
Image may be subject to copyright 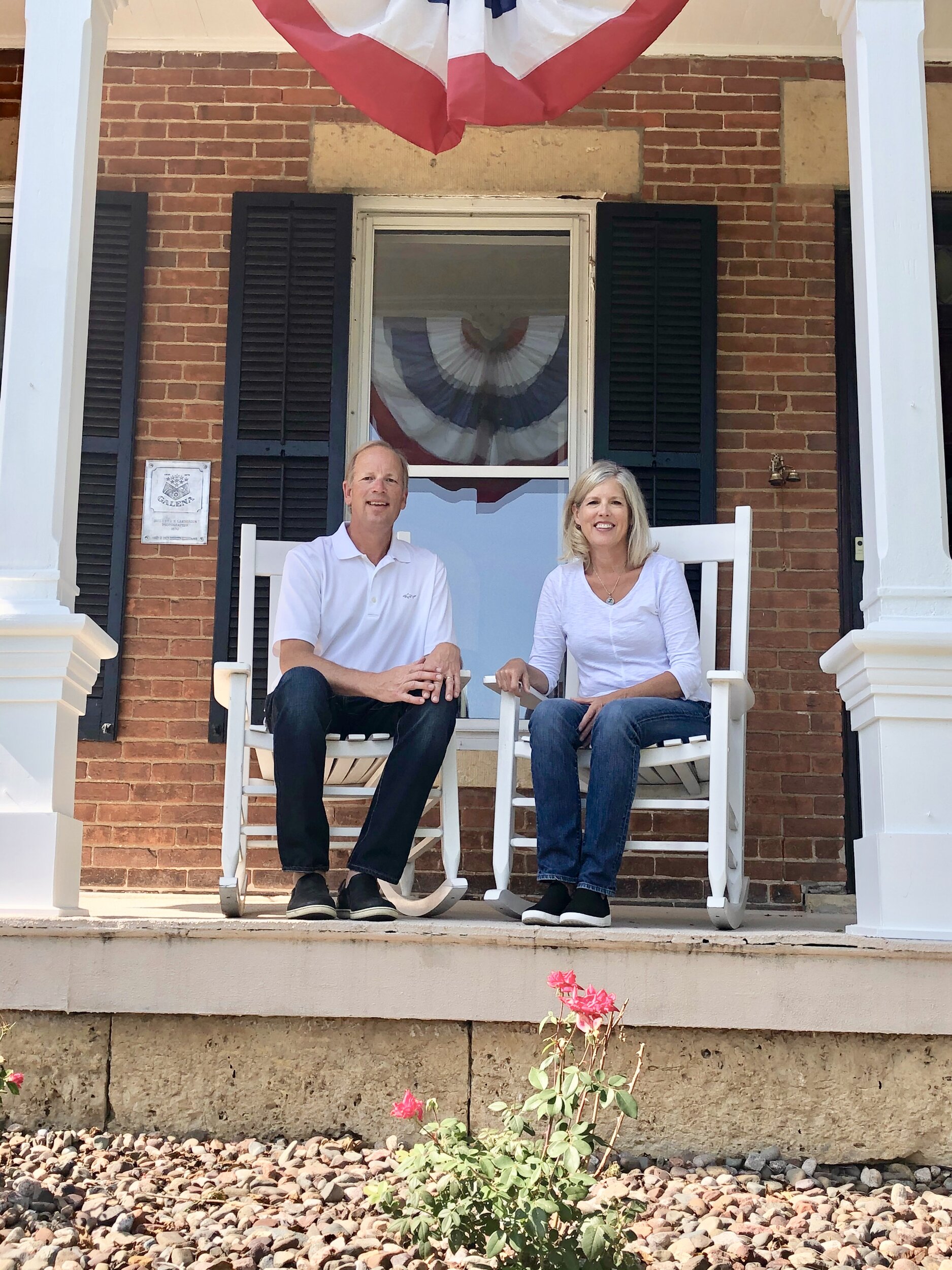 History of the Inn:

David Harvey Lamberson was born in Hampton, IL on September 24th, 1840. He received his education in the schools of Keokuk, Iowa, where he also began business as a clerk in a wholesale notion store. Being ambitious to make business for his employers, he made trips with a four-horse team through southern Iowa, selling goods.

His family, however, moved to Galena, IL, and he soon followed. During the late 1850s he was employed in the sewing machine business in Galena, next door to the photograph gallery of George Johnson. Mr. Lamberson saw the potential of the business and decided to learn the trade. By 1860, he was advertising "Photographs of the city of Galena" in the Daily Advertiser. His gallery was located at 167 Main Street (now 100 S. Main Street, above the VFW).

On December 10, 1863, he married Elizabeth "Lizzie" Rachel James, and a son, George, was born to them the following year. In that same year he formed a partnership with Elizabeth's brother, J. E. James, of Galena. The two men carried on an extensive business advertising the most up-to-date photographs, including many stereoview photos of scenery, residences, and public buildings.

Elizabeth gave birth to a daughter, Jessie, in 1865.

In October of 1868, the firm of Lamberson & James dissolved by mutual consent, and Mr. Lamberson became an agent of the Asbury Life Insurance company, headquartered in Chicago, eventually becoming Supervisor of Agencies for Illinois.

Mr. Lamberson purchased the land atop "Quality Hill" in April, 1870, and at the age of 30, proceeded to build this magnificent home for his wife, Elizabeth, and their children.

In a letter archived in the Chicago History Museum dated October 11, 1871, Lamberson writes to his brother, Frank, after traveling to Chicago from Galena to deal with the aftermath of the Great Chicago Fire: "Thousands are coming from every direction to see the remains of this once magnificent city."

The Lamberson family moved to Chicago in 1873 and another daughter, Mary, was born to them that same year. In 1875, they welcomed their 3rd daughter, Maud.

In the mid-1870's, the Remington Manufacturing Company gave Mr. Lamberson sole authority to sell their products out of Louisville, Cincinnati, Philadelphia and Washington, and placed him in charge of the Boston and New England business. Later, he became manager of the western territory of the Remington Company. He soon became owner, buying out the western territory of the Remington Company and, partnering with H. Furman and E. Lathrop, controlled the entire product of Remington & Sons until Mr. Lamberson sold out his interest and retired.
Because of his extensive knowledge of finance, he was chosen to be Chairman of the Finance Committee and superintendent of stock subscriptions of the Chicago World's Fair.

The following letter from Mr. Lyman Gage (President of the Board of Directors) speaks for itself: "As your term of services for the World's Exposition of 1893 is about to expire by reason of the accomplishment to the great work of raising $5,000,000, I think it due to you that I acknowledge the energy, tact and devotion which you have exhibited in the work."

On January 5, 1909, Mr. Lamberson collapsed and died in a cab, after giving the driver instructions that he be taken home with all possible speed.

David and Lizzie Lamberson sold their home to Henry and Anna Wallace in 1875. Henry Wallace owned a men's clothing store located at 100 N. Main (today's Kandy Kitchen is at this location). The Wallaces lived in this home for 50 years, raising 4 children, entertaining and hosting their daughters' grand wedding receptions in the formal dining room and library.

The Lamberson home was sold 6 times between 1925 and 1990, and in July, 2016, Brian and Michelle Heurung became the very proud 9th owners of this beautiful home.